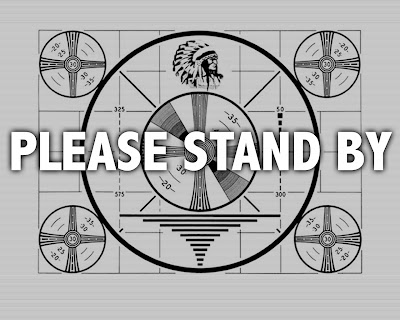 The Emergency Broadcast System was established to provide the President of the United States with an expeditious method of communicating with the American public in the event of war, threat of war, or grave national crisis. The test allowed the FCC and broadcasters to verify that the EBS tone transmitters and decoders were functioning properly and that outlets nationwide would carry emergency programming within a period of five minutes when the system was activated.

Growing up I remember the Emergency Broadcasting System testing weekly on television. The above image would appear on the screen along with a high pitched tone signal to get our attention, followed by an announcement similar to this:

“This is a test of the Emergency Broadcast System. The broadcasters of your area in voluntary cooperation with the FCC and other authorities have developed this system to keep you informed in the event of an emergency. If this had been an actual emergency, the Attention Signal you just heard would have been followed by official information, news or instructions. This is only a test.“

What about you? Is God trying to get your attention with troubling circumstances?

Are you living in a crisis, war or threat of war?

Kids on drugs, involved in crime and headed for jail.

Stress is taking a toll on your marriage or physical health.

Does it seem like everything will come crashing down at any moment?

You may not have this exact set of problems. But at one time or another everyone meets a crisis in their family. When we do it’s easy to ask: Why God Why? or When God When?

In school, we don’t get promoted to the next grade level without taking tests. Life works the same way. God gives us tests of faith to see if we are ready to go to the next level. The nice thing about God’s tests is if you fail them, you get to take them over and over again until you pass.

Instead of whining, complaining and begging God for answers, we need to heed God’s EBS warning and wake up! It’s time to change the view of our circumstances and see things from an eternal perspective. When we look at things from God’s view it’s easier to see potential purpose in times of struggle.

God never wastes anything. He will bring about something good if we will truly give it to Him.

So when we go through times of struggle let’s ask God to teach us the lesson He wants us to learn quickly so we can pass the test and move on to our promotion.

Will you pass your test?  Call out to God today. He will hear you.

In my distress I cried out to the Lord;
yes, I prayed to my God for help.
He heard me from his sanctuary;
my cry to him reached his ears.
~ Psalm 18:6

Grace: On the Journey to God
by Michael Casey

Streams in the Desert, KJV
by Mrs. Charles E. Cowman

Win from Within: Finding Yourself by Facing Yourself
by John W. Gray III